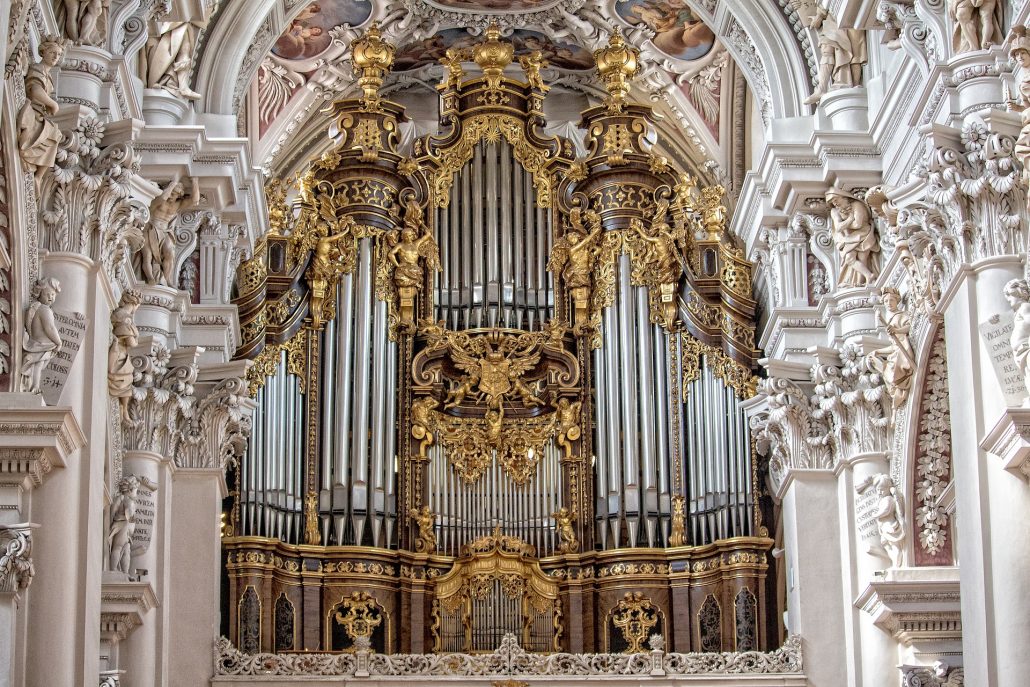 The biggest pipe organs in the world

Beautiful and large pipe organs can be found all over the world. These are the most beautiful pipe organs. Which impressive organ is your favorite?

In the St. Stephen’s Cathedral in Passau (Bavaria, Germany) you’ll find the largest pipe organ in the world. This organ has 17,000 pipes. Every day at twelve o’clock in the afternoon there is an organ concert of thirty minutes. Do you want to listen? Then you have to pay 4 euros. In the meantime you can enjoy the beautiful church with old tombstones, a fountain, a huge painted ceiling and all kinds of altars and paintings. But remember, you can not take any pictures.

The largest organ in the Netherlands can be found in the Grote- or Sint Laurenskerk in Rotterdam. This beautiful organ has 85 stops and 7,600 pipes. It was built by a Danish company and was commissioned in 1973.

Another beautiful organ is the Schnitger organ in the Dutch Martinikerk with grandiose hollow pipes. These pipes consist almost entirely of lead. This organ also has unique bass pipes, which are now more than three hundred years old. A fantastic design by builder Arp Schnitger.

Many organ fans praise the Organ der Stadtkirche in Waltershausen (Germany), built by Tobias Heinrich Gottfried Trost in the period 1724-1755. “This organ has a fascinating sound”, Ewald Kooiman, organist and professor, once told in an interview with The Dutch newspaper ‘De Volkskrant’. “Very different from what we’re used to: soft and silvery.”

The auditorium organ in Boardwalk Hall in Atlantic City is called the jumbo jet of the pipe organs. This gigantic instrument has 33,112 pipes and these are divided into seven manuals. The sound of this organ has to fill an auditorium with 41,000 seats. A big task, but Boardwalk Hall is up to it.

The Americans love big, because the new Christ Cathedral in Garden Grove (California) has over 18,000 pipes. Impressing!

Sober, but impressive. That’s how we describe the Newberry Memorial Organ at Woolsey Hall (Yale University) with 12,617 pipes. This organ is not that old yet, because it was built in 1902.

At Mixtuur we adore old organs in the period from 1400 to 1800. The oldest playable organ in the world can be found in Basilica of Valeria in Sion (Switzerland). This organ was built in 1435 and was expanded in 1687 with four registers. In the last century the organ was refurbished by curator Maurice Wenger, so that the instrument can be played again. Every summer there is an international festival for old organs – the so-called Festival de l’orgue ancien de Valere – and enthusiasts can listen to this old organ.

City trip to Milan? Then make sure to visit the San Maurizio al Monastero Maggiore. In this church you can see a beautiful organ from 1554. The organ is located in a kind of wooden case with two huge painted panels on both sides. You would almost miss it, because the church is grandiose and overwhelming.

The most famous organ in the world can be seen in the Notre Dame in Paris, France. The pipes contrast nicely with the stained glass. This organ has 8,000 pipes, is the largest organ in France and is visited annually by many tourists.

Do you want to play on the world’s most beautiful organs?

The dream of every organist is to play on famous organs. Did you know this is possible? With Hauptwerk (software) you can play on many pipe organs and you don’t have to leave your living room. How that works, you can read on this page.

Not only have they distanced God in the infinite universe by devising the Copernican system but even added a thousand years to History to distance the Christ from us towards the myth.
If anyone wants to contribute to my research to restore the truth, you can make a free donation “Contribution for the revision of History“.
Paypal link:
paypal.me/1000years
More info:
%d bloggers like this: